January 01, 2020
James, Stu, Rich and I hit beaumaris on a perfect seabreeze up to about 22 knots.  Tried out the new bar which is sensational, nice and short so lots of stability.  Got lots of big air, rotational jumps, transitions, heaps of fun.  Hamish was out on his windsurfer too which was great - he seems to be enjoying himself.
Post a Comment
Read more

December 31, 2019
With my main bar looking like it is about to give way, I took out my old 7 bar and changed over the safety from the other harness.  A few too many variables which should have been a bad sign.  Got out on the water and as soon as I put some real power through the kite (a loop) the safety went bang.  Then, cause I hadn't put the safety on the harness correctly it also popped.  Leaving me with a long swim in, and James to grab my kite which drifted in by itself, luckily the bar didn't grab on a rock groyne or something which would have been a disaster.
Enough impetus to go and get a new bar and kite - so yay !
Post a Comment
Read more

December 31, 2019
Mucked around with the wrist mount - not a fan as I was worried I'd wrap the lines somehow.  Amazing to be down the prom again on waves.
Post a Comment
Read more

December 15, 2019
Dodgy wind saw me head down to the southern most section of the beach and surf the waves down that way for as long as I could.  James, Pete and Mike all followed me down and we had fun while it lasted.  Straight westerly not ideal for that beach, you definitely need some southerly in it to keep it consistent.
Post a Comment
Read more 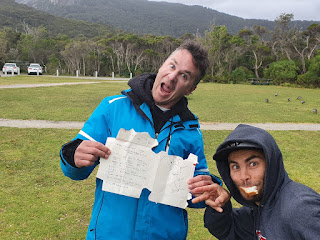 An amazing north westerly forecast made us explore some options.  We planned a track from the sandy point inlet on the eastern side, all the way down to Darby's beach at the prom.  Epic tour !

We started by cycling cars across to the other side of the inlet.  James, Anthony, Dobbo and I stayed and pumped kites while the other guys dropped the cars down at Darby's beach.  On their return, we all put kites in the sky and headed down the inlet.  Kinda busy with 9 kites around, but the wind was absolutely cranking, so I was well lit on my 7.  Big jumps and lots of secondary lift, I mucked around with some rotations and lots of toeside stuff until we were ready to head off.
With a wave of the hand we were off.  Saw Lee do a spectacular drag across a sandbar and had to avoid some crazy moves from Adam, but otherwise all was going well.  Spent heaps of time toeside going straight downwind which was fun, and cranking it across very shallow water in sandbars.  Avo…
Post a Comment
Read more

December 15, 2019
Grabbed a very big kite - 16 or something - and a big nugget and got a reminder of what it was like to be overpowered.  Kinda fun to be out, but not something I would bother investing in.  If there is not enough wind for my 10, I really can't be stuffed trying to grind it out with a big monster kite.
Post a Comment
Read more
More posts